After the experiment with the Red Bull antenna, I built a second Cylinder Dipole with two energy drink cans of 500 ml. The cans together with the coil resonate at 16 MHz.
The 300 ohm ribbon is connected to the point at the top of the coil (in the picture) with the red and yellow alligator clips (See the white arrow in the top of the picture). The antenna is hanging from the ribbon. I can tune the cylinder dipole for the a SWR of 1;1 with my symmetrical tuner.

Closed cylinders
In this antenna I used the complete can, without removing the top and the bottom of the can, to keep the construction simple.
Closed cylinders are much stronger than open cylinders.

The table below shows the DXCC countries per band and per power category.

Across the Atlantic
I very much enjoyed the QSO with N1KWF in New Hampshire over a distance of 3490 Miles, with a power of 3.6 Watts.

Click on the table below, to read the hand written log, in which I write down the power in each QSO.
The QSO's in red are more than 1000 Miles per Watt QSO's.

When I putted the  Red Bull  antenna into use, during the ARI DX 2015, I was aware of the controversial nature of short antennas. But I had absolutely NO doubt about this short antenna, with it's "wingspan" of just 12 inch.
I was convinced that I could make QSO's with QRP or even QRPp from the shack.

Further I was curious, whether the symmetrical tuner could be used to get a SWR of 1:1

I clamped the PVC tube of the antenna between  the bookshelf and connected a 300 ohm twin-lead between the symmetrical tuner and the coil of the antenna.
The coil had 14 turns on a 40 mm coil former. I did not bother to change the coil to lower the operating frequency, which was 26 MHz and thus much higher than 14 MHz, on which I would operate. The 300 ohm ribbon is is equipped with two alligator clips, which are connected to two connection points on the coil one turn apart.

SWR.
The tuning runs smoothly. It's very easy to get a accurate SWR of 1:1 So I could transmit with the antenna. I only tried 14 MHz, because that was, where the action was and I wanted to make QSO's immediately. I did not try 21 MHz or 28 MHz..

Does it work? Yes.
I convinced myself with 360 milliwatt, with the antenna indoor, at a height of 4 meter above the ground.  Is it not amazing.

The first QSO that I made with this 12 inch antenna, was a more than 1000 Miles per Watt QSO.

On the air
After adjusting the SWR, I heard the station II6T.
I could easily make a QSO, using a power of just 360 milliwatt. I tried to work them, earlier in the contest, on the damaged inverted V. But they could not copy my RST on the cracking inverted V.
I am very pleased, with this first QSO on the  Red Bull  antenna. Later I realized that this QSO is a more than 1000 Miles per Watt QSO.
I made QSO's with EA, YU, SM, YL and LZ with 3.6 W
With 800 mW I managed to make a QSO with HA and a QSO with UR.
Further I made a QSO with 360 mW with an other station from Italy.
IK0YVV copied my call immediately, when I answered his CQ. His signal was strong, it was over S9.

On receive
There a large difference between wire antennas, like the half wave dipole or inverted V and the short Cylinder dipole. The signals that are received on this short antenna, are much weaker. But also the short antenna picks up less noise. I noticed that it takes some time to got used to the weaker signals.

Improvements and Next steps
From one moment to the other
I decided to put up this antenna this antenna in the ARI DX contest 2015, when my inverted V let my down. I constructed the  Red Bull  antenna to test the properties of symmetrical feeding, a few months before. The test showed that the cable, which is connected at the middle of the coil,
has no hand effect on the cable.  The antenna lay around in the shack.

Tuning and SWR are not critical
Was it properly tuned to the operating frequency? NO.
But I am very happy with the fact that the cylinder dipole is NOT critical in tuning and that the SWR is easily to adjust. 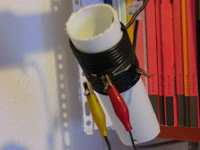 Connecting the twin-lead.
One turn apart

I thank Franck F4HFQ for the link from Radioamateur.org to this Blog entry.  Franck writes:

Red Bull  gives you wings
This a a catchy one liner, I could NOT resist, LOL.
Please notice that the Cylinder dipole is NOT a joke, but a very short, but working antenna.

Test antenna
A few months ago I built an experimental cylinder dipole with two  Red Bull  cans and a coil, that works as an impedance transformer, to test the properties of symmetrical feeding.
By using symmetrical feeding, the cable doesn't radiate and the cable has no hand effect.

Damaged inverted V
The ribbon of my inverted V is damaged by the wind.  I wanted to make a few nice QSO's in the ARI DX contest, but I was very disappointed by the inverted V. The SWR is constantly changing, even with the slightest bit of wind. The inverted V cracks when the ribbon moves, both on receive and transmit.

Into the ARI CW contest
After a while I heard II6T again, but now on the cylinder dipole, I answered their CQ with 360 mW. I got an immediate response and the QSO was easily made. WOW.
In total I made about 10 QSO's on the  Red Bull  antenne, with a power of 360 mW to 3,6 watts in the rest of the ARI DX contest.
Please read the interesting details on this amazing 12 inch long  Red Bull  test antenna,
that I used in the ARI DX contest 2015  (Click)

Later I realized, that the first QSO with the cylinder dipole is good for 1000 Miles per Watt. hi.

Auto transformer
The coil acts as impedance transformer. The 300 ohm ribbon is connected to 2 points on the coil that are 1 turn apart. The coil it self has 14 turns.

Symmetrical feeder
The twin lead is connected to two connectors one turn apart, at the middle of the coil, to feed the dipole symmetrically.
I chose for the symmetrical construction to avoid  hand effect of the ribbon.

In his informative Blog, Roger G3XBM wrote about aircraft scattering of signals on 6 m.
I had the pleasure of making an analysis of the WSPR spots reported by Roger.

Drift
In WSPR the drift is measured over a period of 1 minute, so the drift is given in Hz per minute.
Recently I included Drift in my Excel spread sheet that I use to make an analysis.


Thanks to Roger. FB. 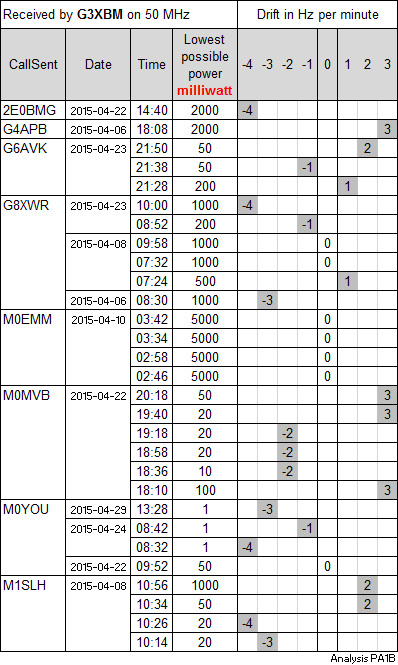 A few day ago I wrote to Roger: See article
Hello Roger,
This evening I took some time to make an analysis of a number of spots on 6 meter.
I took the most interesting spots for airplane scatter.
I hope you like it and can place it in your blog.
I left in M0EMM to show the difference. hi
Positive drift means the path is becoming shorter.

The spots of M0MVB shows spots where the path is becoming shorter (+3Hz per minute)
and spots where the path is becoming longer.   (-2 Hz per minute)
I just saw that the spots of M0YOU with scatter, are much stronger than the spot without scatter.
The lower the lowest possible power, the stronger the signal.
A lowest possible power of 1 mW is 17 dB stronger than 50 mW. hi.
I left in the spots of M0EMM, to show that there is no Doppler and the signals are not that strong.