My personal Christmas card shows winter pictures of my favorite canoe spot.
The water is called: "Oude Zederik" and runs from Meerkerk to the river Lek.
It's a beautiful area with water and reedbeds.
The windmill is rebuild in recent years and is visible from the A27.
Gepost door Bert, PA1B op 21:19 8 opmerkingen:


This weekend our granddaughters stay with us.
On Saturday the younger of the two (4) made a drawing.
My granddaughter had asked me, how I made the colors on a drawing, that I have made.
So I sugested to color her drawing, while she was painting another drawing.
The young artist said: WOW, when I showed her the drawing with the colors. hi 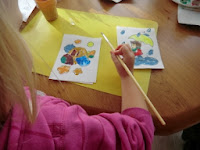 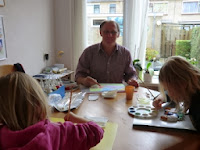 On Sunday it started to rain, when we had planned to go to the park.
So it was time for panting.

When the rain stopped, we went to the park.

This beautiful Award I received for the particpation in the
Black Sea Cup International.
This contest is organized by the Black Sea Contest Club.
Contests like the BSCI offer a great opportunity to work with the lowest possible power.
When the S-meter goes up, my power goes down.

It's great to take a station with you on holiday.
But when I am on holiday, I am on holiday and not on a DX expedition.
In general I make a few QSO's each day and a modest number of QSO's in a contest in the weekend. 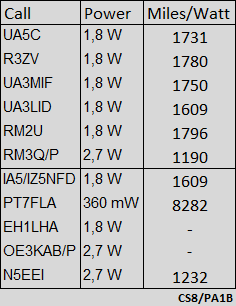 Most of the time I work with Search and Pounce.
The signal of PT7FLA was very strong, so I used just 360 mW.

2 Way QRP QSO with N5EEI
I never hunt for other QRP stations, so when I gave CQ with 2.7 watts,  I was amazed to meet another QRP station.
Dave N5EEI reported that he worked with 5 watts into a dipole 10m up.

I was lucky to use just 1.8 watts in most QSO's on the first days, since most of the QSO's resulted in a more than 1000 Miles per Watt QSO.

Antenna
The antenna was placed  just before the RDA contest.
I placed the antenna on the roof, together with João of the technical service to get access to the roof.
The antenna wire with a lenght of of 20 meters, ran from the balcony up to the roof and then to a point a few meters above the roof. The antenna did a great job.

After we booked our holiday to hotel Royal Garden in Porto Delgada on the island Saõ Miguel, I hesitated wheter I should take the portable station with me.
But I am glad, that I did bring along my FT-817 on the 12V - 4Ah battery.

Activity
In the months before the holiday, I figured out that the YODX HF contest fall into our holiday. This is a very fine contest in which everyone works everyone.
If I could use a 20 m long wire, as I did in 2011 on holiday on Terceira, (click to read the article)
I would have great fun in the YO DX contest.
So I decided to take the FT-817 with me.
But at that time I was not sure, whether it would be a success.

The problems:
My FT-817 has a maximum power of 2.7 watts.
On holiday I operate from a 12V-4Ah battery, so the power will be even lower.
The extra weight of the heavy FT-817 and the battery.
Further I did not know, whether I could put up an antenna.
But most of all, if I could only use an antenna in the central garden, it was possible
that all signals from the antenna could be blocked completely.
The XYL does'nt want to be visible while helping lowering a wire from the balcony.

Antenna
At first I tried to make a end-fed sloper from the balcony into the garden, but in the proces of
lowering the wire, the wire got stuck and my wife refused to help any further. End of part one.
When I mentioned, a few days later, that the roof would be the best place for an antenna, my
wife said: "ask the reception".
The lady of the reception (Graça) was very supportive.
I showed her the licence with the authorization to use a portable station from a hotel.
She first contacted the manager and then the men of the technical service to get the access to the roof.
So later that day, the 20 meter wire was "flying above the roof". WOW.
Thanks to Joaõ, for us putting the antenna up together and to Miguel to remove the antenna.

Feeding the antenna
I don't like antennas with a difficult earth system.
So on holiday I use a end fed antenna which is fed like a Zepp via a 300 oms ribbon.
For more info see the article on my site: The QRP holiday transmatch.  (Click)
The 300 ohm ribbon from the room to the wire has a lenght of 4.8 meters.
The ribbon transforms the high impedance of the feeding point of the wire into
a lower impedance at the transmatch, which is connected to the transmitter.

Starting on the 17th of August until the 25th of August a total of 72 QSO's was made.
So the antenna was working very well.
Gepost door Bert, PA1B op 23:48 8 opmerkingen:

We had a wonderful holiday in Ponta Delgada on the Azores.
This year we visited the beautiful island of Saõ Miguel.
We stayed in hotel Royal Garden, which is a hotel in Chinese style. The rooms that are situated around the garden all face to the garden.
We choose for Porta Delgada, because it has a ancient city centre in walking distance from the hotel.

In the center of the city you find the square with the gates. 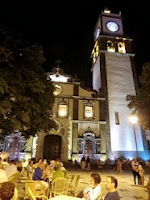 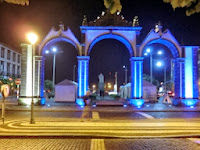 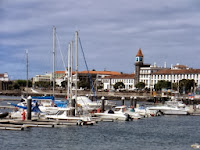 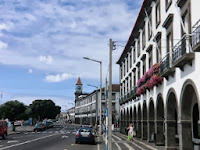 I received a beautiful QSL with the picture of a very young YL.
Isn't she cute?

Thanks to daddy Christo LZ3FN.

Tomorrow I will attent the annual meeting of the Benelux QRP Club in Apeldoorn.
In the same building during a meeting of the VERON, Randy K5ZD will talk there about CQ WW.
I knew that I met Randy in several contests, so I checked my log to see what power I had used in each QSO.
This afternoon I wrote a card for the QSO with the lowest power.

Update:
The lecture by Randy K5ZD was performed over a video link.
So my card will be send via the buro.
I met a few HAMs that also had a card for Randy with them. hi

I was surprised by the large number of QSO's that I made in the
ARRL int DX CW contest in February 2013.
Yesterday I received the September issue of Electron of the Veron.
I found out, that I am the winner in the QRP, all band section for the Netherlands.

I like this contest very much since the DX stations, like myself, give their power in the exchange.
The receiving station is immediately aware, that I use QRP or even QRPp. hi
The maximum power of my FT-817 is 2.5 watts, since I had a serious mismatch.
Most QSO's were made with 2.5 watts. 9 QSO's were made with 800 mW and 7 with 360 mW.
Some operators were at first confused by my exhange 599 003 for a power of 2.5 watts.
In that case I will give an additinal 3W 3W until it's clear that my power is really that low.
My antenna is an Inverted Vee

In many contest QSO's, I use the lowest possible power in each QSO.
When the S-meter goes up, my power goes down.
Thank you all for the activity in the contest.
Gepost door Bert, PA1B op 09:13 14 opmerkingen: 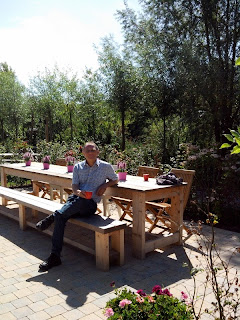 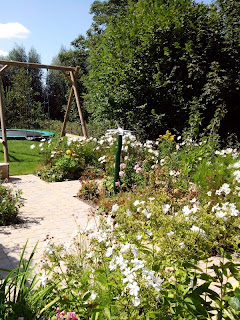 In every contest it is possible to make QSO's with very low power.
The stronger the signal, the less power is needed, to answer a CQ.
I had very much fun with low power.
Many of the QSO's are good for more than 1000 Miles per Watt.

This is so much fun.
Stefano IZ3NVR has set a world record in the CQ World wide RTTY WPX contest for 15 m QRP. See the entry in the Blog of Stefano.

His achievent is mentioned in the  results  on the bottom of page 2.
Congrats on this great achievement. 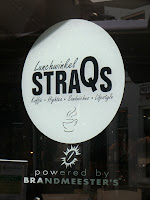 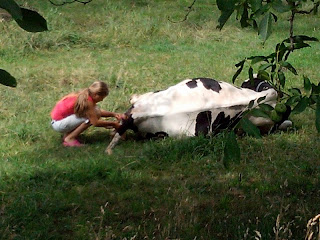 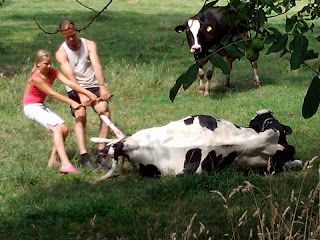 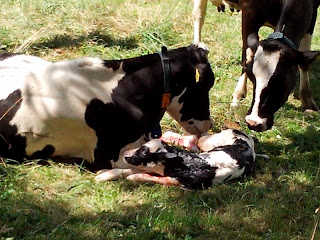 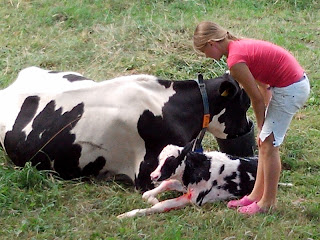 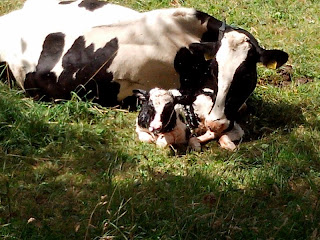 I am getting  more convenient with the new programs on my laptop.
Therefore I made a detail of a photograph of an antenna mast that I photographed during our holiday in Malta.
I shows the top of the mast with a antenna for direction finding.


At the end of April and the beginning of May my wife and I had a short  holiday on Malta.
We stayed in a hotel in the north.

Because this was a short holiday, I left my FT-817 at home.


We visited Valletta by bus.
We did not rent a car.
Horse in Valletta

Mosta.
Notice the Arriva bus
at the right

We had a beautiful room on the top floor,
with an extra balcony of 4x8 meters next to the room,
with stretchers.