I received a fine comment from Dave K5MQ on my previous post:
Dave further mentioned that he was using WSPR with a power of 1 W om 160 m.

Here is a table with spots from Daves 1W WSPR signal from the 16th to the 28th of February 2015.
The lower the Calculated Lowest possible power, the better the propagation. 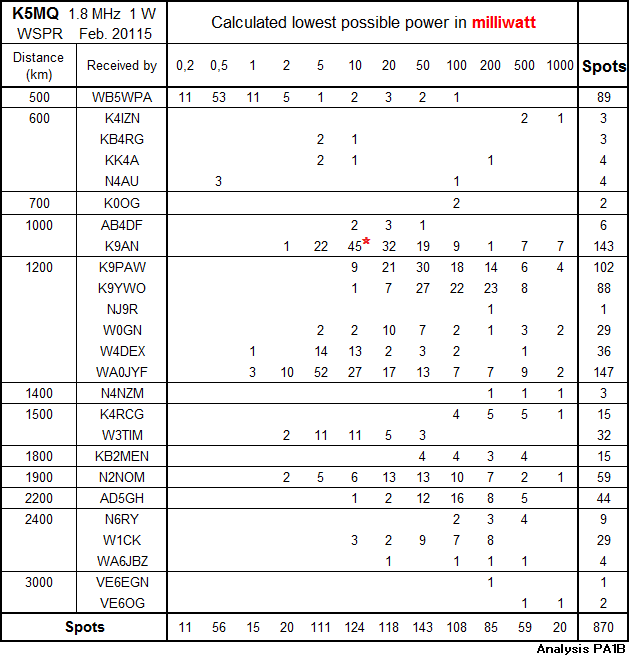 Thanks to  Dave K5MQ.
It's my pleasure to make the WPA (WSPR propagation analysis)
Visit Dave's Blog entry on WSPR on 160 meters.

From time to time I visit the WSPR database to look for interesting spots that are made with very low power.
But this time I was wondering, if there are many operators, that use much more than 5 watts. 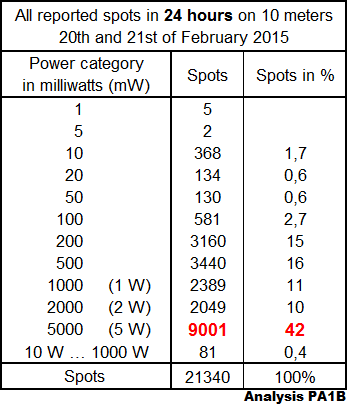 The WSPR spots are collected on 10 meters in 24 hours.

I chose 24 hours to include all operators, that skip from band to band, following the changes in propagation, in all the parts of the world.

The choice for the band was not made consciously.
I selected the 10 meter band, because in the days before, I made an analysis of spots on 10 meters.

One kW
Not all spots that show up in the database with 1000 W, are actually made with 1000 W.
In the past I have seen WSPR spots from an operator that used a homebrew QRP rig, that he proudly showed on QRZ. But the setting in his WSPR program was wrong. He discovered the mistake.
Later the spots showed a power of 2 watts in stead of 1000 watts. hi.

I did not expected much of the PACC, the annual contest from the Netherlands,
because of my antenna.

One wire of the ribbon of the Inverted V is damaged.
With no wind all is OK, but . . .
Frequently the wire does not connect briefly, when the ribbon moves in the wind.
While transmitting the SWR jumps briefly and on receive, the signal disappears shortly.
With S&P I have to repeat my call or exchange sometimes when the wind blows,
In several other contests in the last weeks, I could make QSO's with 8 mW, when the
propagation is very good, and there is NO wind. hi.

I started late and managed to make two QSO's, using Search and Pounce with 3.6 watts on 14 MHz on Saturday. (TA and UR)

In the first QSO on Sunday morning on 21 MHz my call was copied immediately correct
with just 360 mW. But then it took more than 5 times and 3 Watts to give my exchange, 599 UT.
When the ribbon moves, the signal briefly disappears.
After the QSO was completed, I realized that the power was NOT the problem,
because my call was received with 360 mW.

I did not expected to make many QSO's on 7 MHz, since this is a busy band.
Also I was convinced, that giving CQ would not work with the antenna in this state.
So I answered a CQ on 7 MHz.
Immediately after completing this QSO (with S&P), I was called by an other station.
The station went up in frequency, so I followed and answered.
After the QSO, 5 other stations came along, one after the other, without my calling CQ.

This is very unusual for my, because in major CW contests, I often use the lowest possible power with S&P.  hi.

With no (or little) wind, I now decided to call CQ.
So in the last hour of the contest I made many QSO's by calling CQ, between a few occasional gusts of wind.
In total I made 50 QSO's. WOW.