Just for fun I entered the CQ WW WPX contest. I was getting enthusiast for this phone contest by my fellow bloggers who work with phone most of the time. This is the second time that I participate in a contest in phone.

As a QRPp enthusiast I participated in many contests in CW using the lowest possible power.
Even when I prepared for the contest, I noticed that I only had worked CW in the past.
I had to program VFOb of the FT-817 for the SSB segments of the 40 m, 20 m and 15 m band.
Further I had to search for the microphone. hi

I tune with the MorseMachine and the set switched to CW and then I have to switch back to phone before I can use the microphone. When I forget I don't have any power. So I use an extra power meter behind the set, to monitor my power. hi

I started on 15 m. My power is 2.7 watts and the antenna is an Inverted Vee.
After 6 QSO we went shopping.
I was very curious how it would go in this phone contest. But now I found out, that just as with CW with very low power, the signals in phone also have to be S9 or better.
At the moment there are already 38 QSO's in the log. Not bad at all. hi 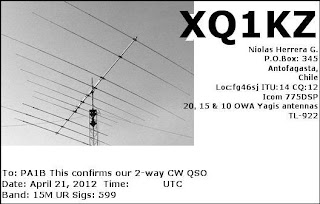 I used an Inverted Vee.
Thanks to Nicolas XQ1KZ for a new DXCC in QRP.

Last week I wrote a small pile of 60 QSL cards. Almost all of the cards were for QSO's with more than 1000 Miles per Watt. The used power in the QSO's was 2.7 Watts down to 1.8 milliwatt.

While I was writing the cards, I took up the plan to take a photograph of one of the many "more than 1000 Miles per Watt QSL cards" that I was writing, just to show how I present the "1000 MPW info" on my a card.

Photo
Actually I was going to photograph the QSL card, that I would send to LZ6C for a QSO with 1.8 mW. For this QSO I calculated 559091 Miles per Watt.
But when I just looked on the camera, it turned out to be that I took a picture of an other card for a QSO with LZ6C, that was made with 36 mW. I can not take a new picture, since both cards are already on their way to the Radio Club Silpa. hi
1000 MPW info
At the top of the card I give the power catatgory:  QRP,  QRPp  or  QRPpp.
QRPpp is the (not official) term, that I use for a power of less than 100 mW. hi
The FT-817 can be adjusted to 5 W, 2.5 W, 1 W or 500 mW, so I encircle the used power.
Well, after a serious mismatch the power of my FT-817 is 360 mW when adjusted to 500 mW, so I write 360 mW above the FT-817.
Since I used the 10 dB attenuator, I encircled the value 10 dB in the attenuator.
The most important value is the power to the antenna. Here 36 milliwatts.
My locator is JO22na. The locator of LZ6C is KN13ot.
Using both the locators, I calculated the distance and the Miles per Watt, with the excellent (Click) N9SSA Distance and MPW Calculator.
The distance is 1006 Miles and 27955 Miles per Watt.

Thanks to the Radio Club Silpa with their Excellent Ears.
Gepost door Bert, PA1B op 14:36 6 opmerkingen:

Go to the WSPR Database to see what is possible with very low power with WSPR.
First choose the band of interest.
Then select sort by: Power
Reverse the order to find the low power spots.
You can see more than 50 spots. Maximum number of spots is 20000. hi.
The lowest power value that can be uploaded to the Weak Signal Propagation Reporter Network
is 1 milliwatt, which is 0 dBm.
Please ignore all the spots with less than 1 mW.

Results with 1 milliwatt
The table below shows spots for 1 mW. (+0 dBm)  The short table below shows spots that were made with  the 1 milliwatt. The signals have traveled a considerable distance.
In this table all the received signals are "solid copy", since all the signals are received with a SNR of -29 dB or more. The higher the SNR, the stronger the signal.
In one of the spots Joe, K1JT is  received with a SNR of +11 dB. (Horizontal arrow)
This is 40 dB above the threshold for solid copy in WSPR of -29 dB. The signal could still be received if Joe had used a 40 dB lower power. Thus with 0.1 microWatt. hi
For more info on this calculation, please click on: Calculated lowest possible power in a WSPR spot. 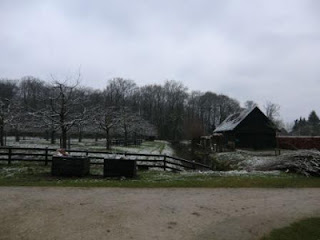 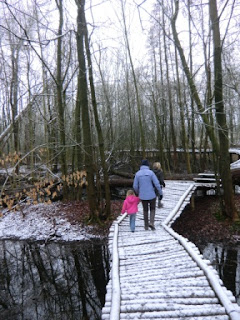 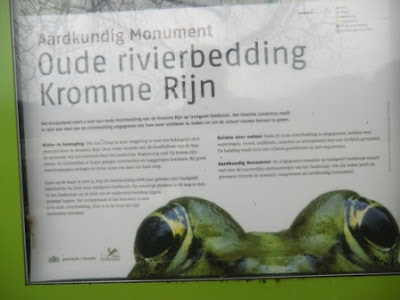 
The Black Sea Cup International is nice contest that is organized by the BSCC.
In just two hours I made 25 QSO's with the lowest possible power.

SOAPBOX: I had great fun with low power, in 25 QSO's
SOAPBOX: In all QSO's, I used the lowest possible power, with
search and pounce.
SOAPBOX: Power used 2.7 W down to 18 mW. Antenna: Inverted Vee
SOAPBOX: Used an attenuator for very low power. Hi.
SOAPBOX: Thank you for the activity in the contest.

My choice for a value of 26 dB is just a guideline to choose your power in WSPR.
If you use a speech processor, you can use a lower value than 26 dB. E.g. 22 dB.
So you can use WSPR for a propagation analysis, to see what is possible with your SSB station.


How to use WSPR to see what's possible with SSB
A power of 80 Watts in SSB or 4 W in CW, can be compared with a power of  200 mW in WSPR.
If you want to know where your SSB QRP signal of 4 Watts will be received, you should use a power of 10 mW in WSPR.

As a CW enthusiast you can use WSPR spots made with 20 mW or 50 mW to analyse with WSPR where your CW signal of 400 mW to 1 Watt can be heard.

Please notice that 5 Watts in WSPR can be compared with about 2 kW in SSB. hi

Looking back, after  nearly  two weeks, I am still confused by the great results.

I made much more QSO's, than I expected. I worked much more states.

On Sunday I first made some QSO's on 21 MHz.

At the right moment to 28 MHz
When I went to 28 MHz, there were not that many stations on the band.
The longer I stayed on the band the more stations also came on the band,
so I continuously met stations, that I had worked before on 14 and 21 MHz.
At first with 12 QSO's in a hour and later with 16 QSO's per hour.

QRPp
In 9 QSO's I used 800 mW and in 7 QSO's I used 360 mW.
For these QSO's, I gave an exchange 5NN TT1 TT1.
In all most other contests, I use the lowest possible power in each QSO.
But in this contest, I only reduced my power, when the signals were much stronger than usual and only when the station was calling CQ continuously. So I did not make that many QRPp QSO's.
But I am very content with the results

3W FB  -and-  QRP GL
On many occasions the operator on the other side informed me, that he was aware of the fact that I was using QRP. From a simple CFM TU, to 3W FB or QRP GL. hi